The club was formed in June 1955 as the Aldershot Camera & Cine Club. The initial membership was 25 and the first Chairman was Jim O’Farrell. Membership cost £2.00 per year. The club did not have any premises at this time so meetings were held at members houses in Aldershot.

In 1957, the club had found a regular meeting place. This was the Red Cross Hall in Aldershot. This year also saw our currently longest serving member join. This was Mike Hammersley. He is still active in the club today and some of his work in displayed on this site.

In January 1965 the club moved to a room in Aldershot Public Library. At this time the cine section was very active in film production.

June 1967 saw the club on the move again. This time to premises in Laburnum Road, Aldershot. Around this time, Sylvia Nash began reporting the activities of the club in the Aldershot & Farnham Herald weekly newspaper. To out eternal gratitude, she still does this today even though she has formally retired from the newspaper.

In the early 1970’s, the club faced serious problems. Membership declined, the club room was unsatisfactory and the future looked bleak.  The club rode these difficulties helped by a decision to meet alternatively in Aldershot and at Church House in Farnham. At the same time, the name of the club was changed to Aldershot & Farnham Camera Club.

In 1979, Tony Fisher was elected as Club Treasurer. He remained in this role untl 2006.

During the 1980’s the club ran with reasonable success.. however, the club room was proving not entirely satisfactory and after much searching a move was made to the present hall was made in 1992.

Now in the next Millennium, the challenge of new technology is providing the club members with new challenges. The advent of Digital Technology to the Photographic Art and increased use of the Internet (without which you, will not be reading this…) we can hope that more people take in interest in Photography as a hobby & art form.

We moved venue once again in May 2001. We now meet at the Hale Institute in Upper Hale, Farnham on Wednesdays at 7:45pm.

Ten years since our 50th Anniversary

The last ten years have seen many changes and the club has got involved much more with the community at large. In some ways the most dramatic change in our activities has been the advent of digital photography. Back in 2005 some of our members were using digital SLR cameras to produce prints, but they were a minority, and many members were still using film SLR cameras to produce slides and prints for competitions. The slide competitions continued to be hotly contested for a few years, with 8-9 members entering slides regularly in internal competitions until 2008, but after Projected Digital Image competitions were introduced in 2009 this interest waned, and the last slide competitions were held in 2010.

In 2007 the AFCC Committee decided to apply for a grant to bring the club up to date with the latest digital technology. Application was made to “Awards for all” and after a considerable amount of paper work, which included a change to the club’s constitution, a substantial grant was finally made in 2009. The club is now the proud owner of a digital HD projector, laptop, loud speakers, wireless microphone, and a high tech ceiling screen. This represented a successful conclusion to a great deal of work from the committee, in particular Chris Stock, who led the undertaking, and David Fisher, who was chairman at the time. 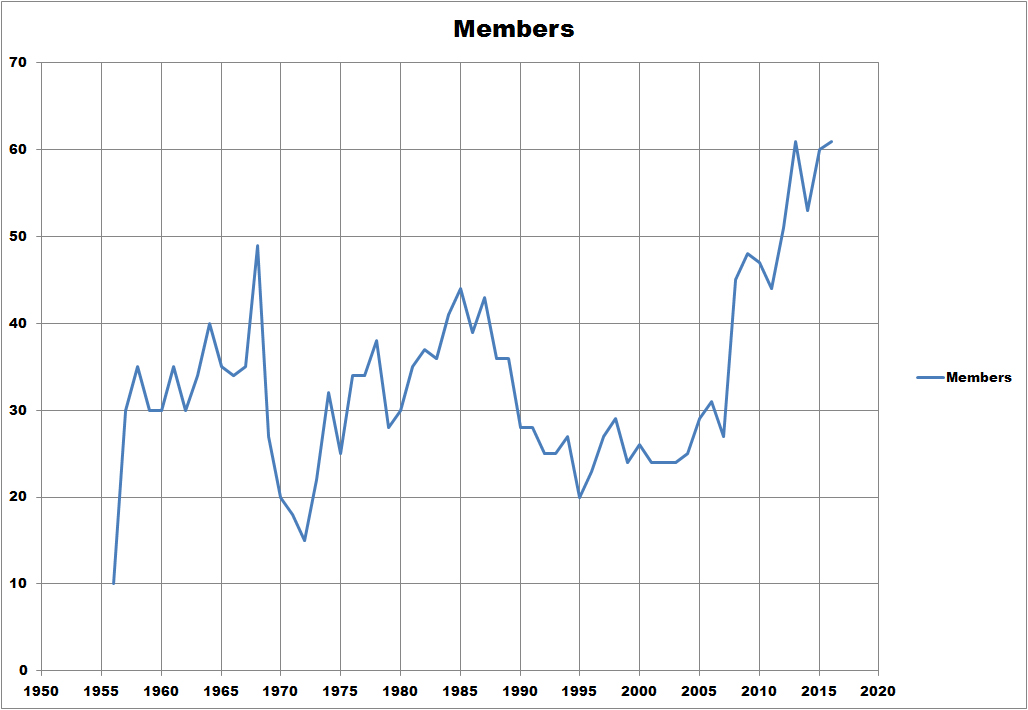 The rise of digital photography, and the ability to take photographs with other devices including tablets and phones, has brought with it a dramatic growth in enthusiasm for photography amongst the general public, and the club has seen a gradual rise in membership since 2003. In 2007/8 another local club, the 43 Club based in Ash Vale, closed, and several of its members came to Aldershot and Farnham, including then chairman of the 43 Club, and long-time friend and popular judge at AFCC, Brian Colley and his wife Ros, Rex Sellars, Tom Rowles and Robin Stovold. These new members brought a sense of humour, and an increased competitive edge to our club. Between 2011 and 2013 we saw a further jump in the membership, perhaps in part because of the introduction of beginners classes. In the last couple of years the introduction of the AFFCC Facebook page has introduced the club to a new audience, and several new members have joined as a result.

Sadly, the last ten years have also seen the departure of several long-term, long-serving members, including Prue Barker (now living in Lyme Regis), Terry Revell (now living in Kent), and the sad loss of Tony Fisher (Treasurer for 27 years to 2006), David Bleach (Secretary for 25 years to 2005), Brian Colley and Robin Stovold. They are much missed.

One of the issues which came with the growth in membership, was the need to retain those new members. We quickly became aware that our long-standing static membership of experienced photographers, was being joined by a flood of new, much less experienced members, who had joined the club hoping to learn how to take better photographs. Simon Taylor volunteered to develop and run Creative Workshops at a weekend in the summer, which took place from 2007 onwards, initially at Hale Institute and latterly at Farnborough Abbey. In 2010 a series of monthly beginners’ classes was introduced, led by Jon Evans, now on their fifth iteration. In October 2014 and June 2015 Mark Grey led successful weekend workshops for beginners both within and outside the club.

Following on from the success of the beginners’ classes, the club introduced a series of Special Interest Groups (SIGs), to provide learning opportunities for more advanced workers. Since 2012 we have supported groups focusing on:

To supplement the SIGs, the club has organised a series of outings in the last few years, including:

Trips out closer to home

The years since 2005 have seen the club, led and inspired by David Fisher, involve itself much more in the activities of the local community, providing photographic services and documentation of events for both the local councils and voluntary groups. This has included:

By request of our members, in 2013 we held our first club exhibition, ably marshalled by David Fisher, at the Harlington Centre in Fleet. This has been a success with both the members and the centre, and 2016 will mark our fourth and largest exhibition at the venue. In 2014 our club name was changed to include Fleet, to recognise the number of members who lived there, and the collaborative relationship with Fleet Town Council.

Club evenings have continued to be a mix of competitions, workshops, and lectures by speakers. We have had a wide diversity of visiting speakers, from serving members of the Armed forces in Afghanistan, natural history experts, to highly qualified RPS members, not forgetting some excellent talks given by our own members over the years. There have been innovations in internal club competitions: from 2007-10 the Farnham Town Council Shield was awarded to the best picture of Farnham and the local district as selected by the mayor, and in 2008 we introduced the Andrich Trophy for the ‘Pitch your Picture’ competition judged by the members themselves. In 2011 the Monthly Challenge was introduced on the club website, to encourage members to go out and take new pictures on a theme.

Throughout most of this period, success and recognition outside the club was relatively limited – a few members had obtained accreditations independently (Simon Taylor LRPS, LBPPA, Mark Grey LRPS, Stuart Kenney LRPS, LBIPP), but 2014-15 saw a group working together inspired by Chris Stock and ably guided by Caroline Colegate – three of them (Paul Baxter, Pat Gibson and Chris Stock) obtained LRPS accreditation in 2015. 2015 also saw our first success in external competitions for several years, when we won the Small Clubs PDI and Print Competitions at the SCPF Championships, with Pat Gibson, Mark Grey and Norma Tryner being awarded individual medals.

So what has happened since then ?  Anyone want to write a catch-up ?